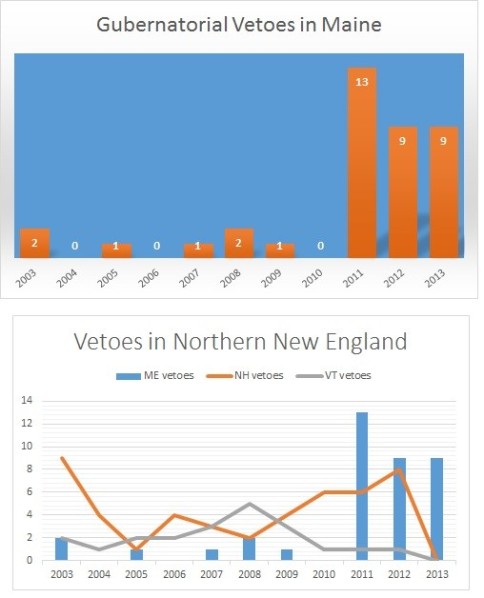 Scott Thistle’s great historical perspective on Governor LePage’s veto streak offers a useful long-term view on the recent vetoes but misses something important about the more immediate historical perspective. Maine (and New England in general) are places with relatively low average veto counts. (Compare our experience with California, for example, where in 2007-2008 Governor Schwarzenegger made a point about his unhappiness with the legislature’s work on the budget by vetoing over 250 bills.) In the last decade, though, our state saw even fewer than average vetoes – making Gov. LePage’s return to the veto a relatively different experience for lawmakers than what they had been used to over the last ten years.

Particularly under Gov. Baldacci’s leadership, there were relatively few uses of the gubernatorial veto.  I think for many of us, the largest surprise in Governor LePage’s reintroduction of the active veto pen in 2011 was that he was using it with a majority Republican legislature. It is frankly less of a surprise to see it during this session, where we know that he objects to the political preferences of the majority party.

This entry was posted in Governor LePage, National Politics, Veto. Bookmark the permalink.