Hooray! We have a budget. There are new, temporary taxes in place to replace some of the gap created by the 2011 income tax revenue reductions. As I mentioned earlier, this is an excellent natural experiment to determine whether this does indeed have the salutary effect on the general revenue stream which was envisioned by the “Gang of 11” earlier this spring. 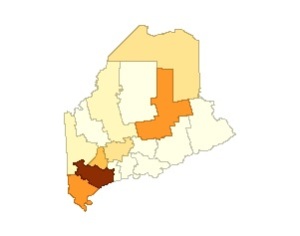 According to the original projection for municipal revenue sharing in FY 2014, counties in the lightest color (Piscataquis, Lincoln, Franklin, Washington, Hancock, Waldo, Sagadahoc and Knox) were to receive $1.8-$3.7 million in municipal revenue sharing. The second-lightest color (Somerset and Oxford) represented $5-6 million, then Aroostook with $8.8 million, Kennebec with $12.3 million, Androscoggin with $14.3 million, York with $17.6, Penobscot with $18.6, and Cumberland with $29.8 million.

OK. So that’s the county-level distribution of municipal revenue sharing, a state strategy intended to help lower property taxes where Maine’s towns are attempting to provide their residents with desired municipal services.

In other words, municipal revenue sharing operates as a tax offset. When it is not applied, municipal budgets are missing revenue relative to the services they provide. This  must either be made up for by additional local taxes — property taxes, since Maine towns aren’t allowed to levy local sales taxes — or local fees on services (higher dump fees, higher car registration fees, higher local rec fees) or by getting rid of services (e.g., no local police.)

Where the governor wished to take those away from towns, that would either represent a new local tax or a change (a cut or a consolidation) in local services. Just so we’re clear, that was one option for what people could have paid.

What are people going to end up paying instead? Well, they will be paying more local tax to make up for the $75 million cut to municipal revenue sharing that made it into the current budget. However, there will also be a new distribution of taxation through the temporary general sales and restaurant and lodging tax increases.

The Maine Department of Administrative and Financial Services was kind enough to share a municipal-level accounting of Maine sales revenue, which is what I used to calculate these additional tax collections. These amounts represent .5% of 2012’s general taxable sales and 1% of 2012’s restaurant and lodging sales, aggregated by county.  What I calculated as a statewide annual increased revenue by this method ($85 million) is reasonably close to the official projection (half of the $178.4 million biennal amount,) so I feel comfortable asserting that this regional distribution for tax collection is pretty realistic.

Here’s what they will look like at the county level: 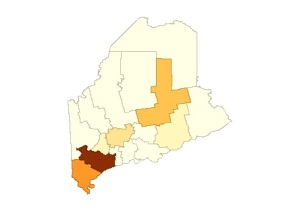 Cumberland County will be raising the most additional new tax revenue next year, adding $24.2 million to the state coffers. York County will add only half of that, with $12.7 million, then Penobscot with $11 million and Kennebec with $7.9 million. Piscataquis County is expected to raise only about half a million dollars.

In each case, the larger towns are the principal driver of sales tax revenue increases. For example, both Bangor and Augusta will raise about half of the additional revenue that will come from each of their respective counties. (Cumberland County is more evenly distributed – Portland will account for less than a third of the additional tax revenue.)

Because of the relationship between Maine’s towns and average local income, look at how much more closely this map tracks Maine’s wealthier areas than the municipal revenue sharing map does. Where a cut to municipal revenue sharing cuts substantially from Maine’s poorer counties, the sales and restaurant/lodging approach weighs much less heavily on Aroostook, Somerset, Androscoggin and Oxford counties.

Maine’s general sales tax exempts groceries, heating fuels, medicine, funerals and such neighborly transactions as yard sales. Meanwhile, the logic behind having a higher tax on restaurants and lodging reflects the common-sense observation that people who can go out to eat or stay at a hotel demonstrate that they’re probably operating at a beyond-subsistence-level economic status.

To account for the fact that population varies across the state, I controlled for population by considering each county’s per-capita share of municipal revenue sharing and each county’s per-capita share of projected temporary sales tax increases.* The darker the county, the more money it “nets” through maintaining both revenue sharing and the new taxes. The lighter the county, the more it pays in new taxes relative to the amount of municipal revenue sharing it receives.

Hancock County, which receives relatively little in municipal revenue sharing – but lots of tourist sales revenue, relative to their population – ends up netting the least from this deal. The biggest beneficiaries of the current approach are otherwise Maine’s least populated areas – those areas which are receiving substantial municipal revenue sharing disbursements, but which aren’t wealthy enough to generate much sales tax from discretionary spending.

This last map demonstrates that even though there are many more people in southern Maine than in other places in the state – and the state therefore substantially subsidizes southern Maine towns — the approach of maintaining municipal revenue sharing plus adding additional sales taxes really benefits Maine’s poorer areas most.

* I just looked at the new projections for FY 2014 municipal revenue sharing  that were just put up on the MRS site today, and am mighty confused because it looks like less than 50% of the original projections, not closer to the 63% I thought was being retained. There’s also some interesting variation by county – Washington County is getting 53% of its original municipal revenue sharing funding, while Hancock County gets less than 47% of its original allocation. Further investigation is warranted! I calculated these maps based on my original understanding of 63% of distributions being retained across the board.