Move over Maine Municipal Association 2011 Fiscal Survey, there’s a new spreadsheet in town. The Maine Ethics Commission’s whole contributions database – including all 218,212 recorded contributions since 2000 –  is my new jam. Here’s today’s picture of the data – isn’t it dreamy? 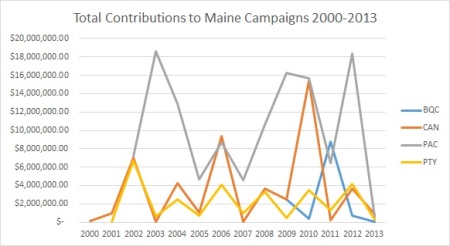 Characterizing these trends from top to bottom on the legend, we can see that ballot question committee (BQC) contributions were separately tracked by the Ethics Commission starting only in 2009. (Before that they seem to have been lumped together with PACs.) The big bump in 2011 was due almost entirely to the folks at Ocean Properties, a developer that wants to build a big racino in Biddeford. Ocean Properties developed a campaign committee with the cheerful and non-specific name of “Putting Maine to Work” instead of using their own name, although it appears they were the sole funder of the ultimately $3.75 million campaign. According to the Sun Chronicle, looks like the folks at Ocean Properties will be trying again. At the very least, they are certainly Putting Direct Mail Printers to Work, so at least there’s that.

Candidate contributions (CAN) are driven most heavily by the gubernatorial election cycle. You can see that while there’s a bump every two years for the state legislative elections, the big bumps on that red line correspond to the gubernatorial elections. (Note the sharp upward trend in spending over time as well, as tracked across those gubernatorial elections.) 2010 featured not only a race for an open governor’s seat but also the legislative races which would conduct post-Census redistricting – the subject of a big and successful campaign effort by the RSLC. It will be really interesting to see how much higher spending trends in 2014. If the rate of increase in campaign spending is similar to the trend over the last three elections, total contributions to candidates should be around $22 million.

However, with so many other ways to give that influential campaign cash, why limit yourself to just giving to candidates? As I discussed in my last post, PACs are much less limited in terms of what they can collect from individuals and corporations, particularly if they avoid “coordinating” with the candidate.

The PAC line is unfortunately a little confusing because of the way that ballot questions and candidate committees are combined here until 2009. (In general, the distinction between these groups is fairly fine.) The enormous bump in 2003 is again because of the spending on casinos on the ballot. The largest spender that year was Marnell Carrao, a Las Vegas casino developer, and this group happens to enjoy the distinction of being the largest single financial contributor to Maine campaigns in the last 13 years, dropping $.6.8 million dollars in an effort to achieve their political goal. (Instead of a self-interest generating name like “Putting Maine to Work,” Marnell Carrao went under the somewhat less inspiring campaign committee nom de guerre of “Think About It.” That is just way too snide to be an effective identity-shielding campaign name.) The casino counter-campaign also raised and spent a lot of money that year, although the contributing sources were more diverse.

Since the Citizens United case makes it much easier to give large amounts to campaigns through PACs, we should see that lavender line continue to trend upwards. Though there has been little for PACs to campaign about this year, they will have plenty of things to spend on in 2014.

Finally, the line representing the trend in contributions to party committees continues to bump along in a fairly regular biennial pattern, flushing to elect legislators, declining in election off-years. The party committee seems to have become a sort of the Christmas club savings account of Maine campaign finance, not attracting the sort of heights and variation in donors that we see across all other categories.

OK, time to say goodnight to the database. Looking forward to admiring it in other lights sometime soon!

This entry was posted in Campaign Finance, Elections. Bookmark the permalink.