I feel like I saw the writing on the wall this morning when I opened my email and saw an advertisement from people who offered to do my job for me. 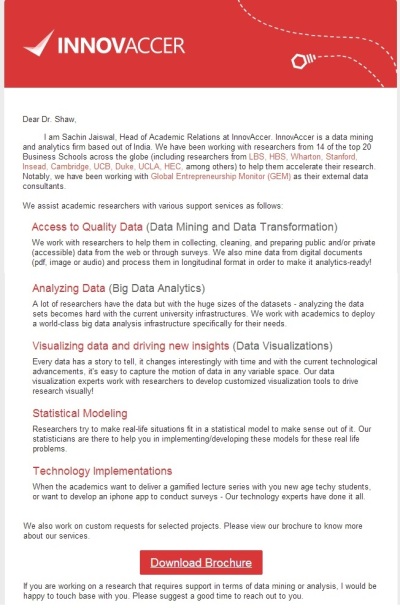 While it is my most personalized experience with it, this not the first time I have come across the idea of outsourcing or off-shoring  academic knowledge work as a way to increase productivity. This very well-intentioned article, for example, advocates it. It extends to many other domains as well, of course. For example, do you want to up the productivity of your expensive metropolitan white-shoe law-firm? Hire cheap lawyers from West Virginia to actually do the work you bill for! Cardiac surgeons not making enough money for their hospitals? Hire cheaper doctors to do the less essential parts of your surgeries! Efficiencies!

And who is it who will be doing my work? Surely some smart, well-paid-for-her-location Indian researcher.  At least by hiring her I’d be helping to equalize the wealth in a global system which unfairly advantaged me – and disadvantaged her – purely by the accident of the geography of our birth. 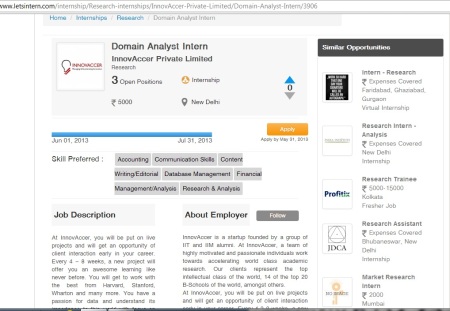 Maybe that work will be done by unpaid interns, with the profit margin going to benefit the wunderkind who realized that the production pressure on Western academics provided a great pain point for which to market a release.

Even I can participate in the undercutting of my own work-value! 21st century capitalism is nothing if not egalitarian.

Before the recession, when wage pressures dramatically increased as the amount of available labor skyrocketed, Paul Krugman had this thoughtful meditation on the fact that although national GDP as a whole might rise from unrestricted free trade, there was no reason to expect that those benefits would be evenly distributed. And indeed, it has not been. 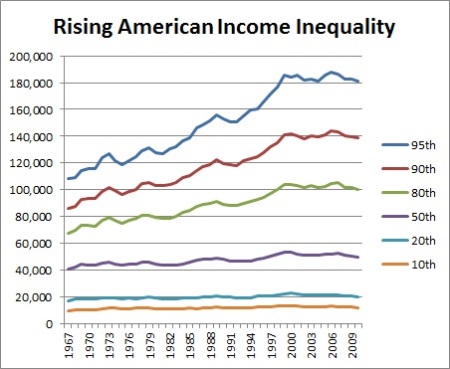 Here’s a little data visualization I made of my own, non-productive initiative. The trend lines track median income (in 2010 dollars) at the limit of each decile of American households. (Note that the top line refers to the top 5% only, which benefited so much more than the top 10% as a whole that even the steadfastly ideologically neutral folks at the US Census felt obliged to break it out.)

Managed to locate a good data source all by myself!  Data cleaned courtesy of our good old American tax money – but again, thanks for the offer, my entrepreneurial friends!

This entry was posted in National Economy, Uncategorized. Bookmark the permalink.