Headwinds, or why I will never play poker with Ben Grant

I must admit to being surprised by Eloise Vitelli’s win in the special election to fill the open seat in Maine Senate District 19. (Here’s me predicting the opposite outcome.)  Given Vitelli’s relative lack of campaign experience, it’s a pretty substantial thing to gain a Senate seat against someone who had run several previous elections.

Of course, this was no ordinary election.  The amount of campaign money spent on this one special election ranked it among the most expensive Maine legislative elections of all time. Donors from inside and outside of Maine clearly saw this election as an important one to win.

Journalists and commentators alike noted the potential impact of the governor’s latest gaffe on the outcome of this election. Certainly, in a county that went soundly for Obama in 2012, there was reason to believe that insulting the president would not help the governor’s party. But how much did attitudes towards the governor help shape the outcome in 2013’s special election?

Above, I present a chart that describes the relative vote percent that Paula Benoit received in each SD 19 town in 2008, when she lost to Seth Goodall, against her performance in those towns in 2013.  Despite the short duration of the campaign and the advantage that Benoit should have enjoyed from increased name recognition alone, she fared worse than she did in 2008 in seven towns. In four towns, she did as well as or better than she did in 2008, percentage-wise.

This chart below suggests that the Democrats were indeed successful in tying Benoit to Gov. LePage, helping to associate her with the current, significant image problems that the governor continues to generate. 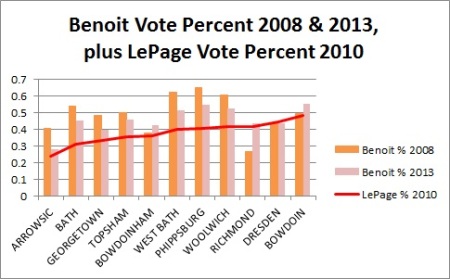 Here, if we map the percent of the vote in each town that the governor won in 2010 against Benoit’s performance in 2008 and 2013, we can see that the towns in LePage fared worst also tended to demonstrate a decline in support for Benoit. Meanwhile, the three towns where LePage did best matched or increased their 2008 support for Benoit in 2013.

Levels of support for the governor appear to predict a town’s likelihood of maintaining support for the Republican legislative candidate.  Looking particularly at the largest district towns of Bath and Topsham, if Benoit had simply held on to the same percentage of voters she had in 2008 she would likely have won. Unfortunately for her, she was not only fighting her campaign opponent, but also against the headwinds generated by the bluster at the head of her own party.

This entry was posted in Elections, Governor LePage, Maine Legislature. Bookmark the permalink.