What is the impact of 81,000 missed appointments?

I have been wondering for a while about the statewide cumulative impact of the MaineCare rides debacle on patients keeping their medical appointments, but it’s challenging to get current year data on Mainecare expenditures. (From the current administration, it’s hard to get it on recent past years, let alone current year. I have a renewed appreciation for what the Baldacci administration did well, including providing decent display tools for DHHS data as well as a number of other agency sources through Maine.gov DataShare.)

This wall was somewhat breached by the numbers provided in today’s article by Steve Mistler on this week’s hearing before the legislature’s Health and Human Services committee meeting. Daniel Donovan, director of the Aroostook Regional Transportation System, found that, under the current outsourced system of ride arrangements, his group had provided 9,762 rides in September. In September 2012, under the old Maine-based system, the group had provided 16,192 rides. This represents a 40% drop in rides provided – and, presumably, Mainecare-insured appointments attended – in Aroostook County. (Aroostook Regional Transportation System serves all of Aroostook county, plus a little bit extra.)

This information also gives us some sense of what the scale of the problem might be in the entire state. We can use the US Census American Communities Survey 2011 data to find out how many people have Mainecare insurance per county.

As you might suspect, the absolute number of Mainecare insurees is highest in places with the largest population. Maine’s most populous counties have the largest number of people insured by Mainecare. 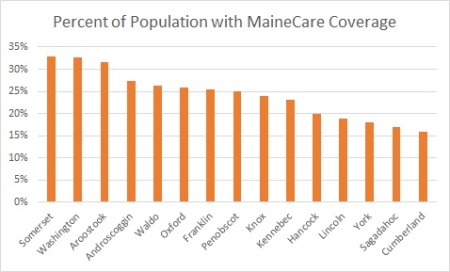 Then, putting the Census information together with the cited data from Tuesday’s hearing, we can see what the Mainecare rides debacle means, substantively, for access to care in the various counties.

It would mean 81,004 missed medical appointments.

In one month alone.

That is just phenomenal. About a quarter of the state uses Mainecare in order to receive health care and DHHS’s continued use of their outsourced ride coordinator is dramatically reducing their access to service.

On the DHHS side, that may be something on the order of 81,000 appointments in September that they somehow didn’t have to pay for.

It will be very interesting to watch what happens to DHHS expenditures during the months of August 2013 and on. When we talk about balancing our state budget “on the backs of the most vulnerable,” savings realized through this method could not be described in more accurate terms.