(Percentage of each county that receives SNAP benefits: Lincoln county lowest, at 8.2%; Washington county highest, at 22.4%. Data is from the US Census American Community Survey Selected Economic Characteristics 2011 5-year estimates.)

We’ve seen some coverage of cuts to the Supplemental Nutrition Assistance Program which went into effect on Friday. This current set of cuts – which is technically the early sunset of a provision that increased SNAP payments – is likely to be further deepened by the budget measure passed by House Republicans. The House Republican-backed food stamp bill cuts $40 billion from food assistance over the next ten years and would see 4 million participants removed from SNAP next year.

The November 1 cuts reduce benefits for recipients by about 5%:

How will this affect the states and localities?

Pew States has a very useful interactive graphic which allows you to compare the impact of SNAP cuts from state to state:

Maine has the 10th highest level of SNAP enrollment in the country, with 251,000 of our 1.33 million residents using the program. If we assume an average benefit of around $124 per person, per month, that 5% cut equals a loss of $1.5 million worth of money for food to Maine families each month. If we use the table listed above and assume an average $9 monthly cut per person, that’s more like a $2.25 million monthly cut to Mainers’ food purchases. (It’s also a monthly loss of $1.5-2.25 million to Maine food stores. This is a national problem for large food retailers like Walmart and Target, who have lowered their earnings forecasts accordingly.)

Again, as readers of this blog and/or attentive observers of Maine might expect, this cut will disproportionately affect food insecurity and sales in northern, western, and downeast Maine since these regions have higher proportions of people receiving food assistance. However, in this case we should also remark on the sheer volume of cuts in the more populous counties. While the proportional impacts will be highest in Maine’s poorer counties, there will be sharp increases in the demand on Portland and Bangor-area soup kitchens and food pantries as those areas absorb a larger number of increasingly needy people. If we assume that the November 1 adjustments represent a $9 reduction in benefits per person, per month, then Cumberland County will need to find an additional $1.5 million in food support for its needy population over the next year to cover that cut. 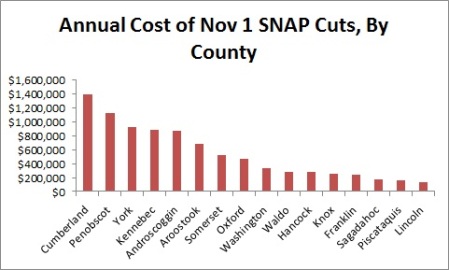