Ukraine is in chaos, and the United States is paying attention. 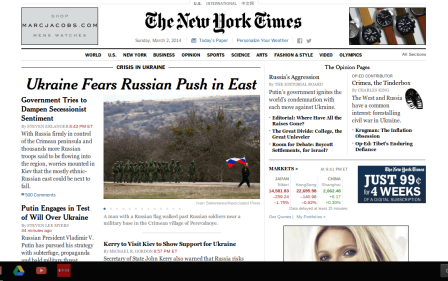 Ukraine has become increasingly interesting to Western audiences as initial protests against the president’s abandonment of a trade pact grew into mass violence.

You know what else happened today? You won’t find it on the front page, but if you click on “World” and scroll down…

on the fourth screen down, after nine additional stories about Ukraine, you will see this story: 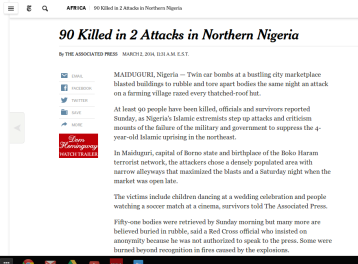 and maybe you will think, Nigeria? Weren’t there some things happening there?

There has been a lot happening in Nigeria, and there has been for some time. The New York Times – and I’m using the New York Times as a proxy here for politically-savvy and engaged US audiences – knows that there are a welter of issues going on in Nigeria. However, it’s not so much a question of “what is the US going to do about it?” and “how will we stop this thing from happening?” as a “well, what a tragedy.” After the BP Deepwater Horizon oil spill in 2010, the New York Times ran a story entitled, “In Nigeria, Oil Spills Are A Longtime Scourge.”  It revealed the scalding news that the Niger delta has experienced the equivalent of an Exxon Valdeez-sized oil spill every year for the last 50 years – and then framed it as “a cautionary tale” for the US.

In the last few years, Nigeria turned to even greater tragedy, in terms of the sheer volume of violence and displacement. Boko Haram, which means “Western education is sinful,” has committed some of the most horrifying attacks of the new century with a special focus on killing people in places of worship and in schools.  Their efforts have been targeted at killing people who support democracy and want to learn English.

Why is violence in Ukraine dominating the news, and Nigeria not? It’s not the level of violence. I looked at the number of stories written in the New York Times about Ukraine and Nigeria over the past year, and I plotted them against the number of political deaths per month that I found listed in various timelines of the crises. 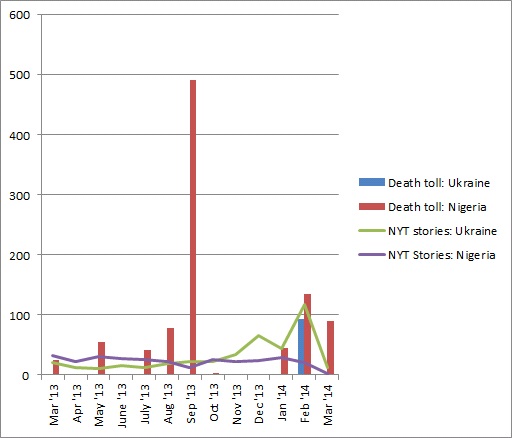 The purple line is stories about Nigeria. It does not vary at all with the number of deaths over the past year there. (In September, Nigeria experienced nine serious casualty-causing events leading to 491 deaths; there were two NYT stories about them.) My death toll for Nigeria here comes from a few minutes of looking around on the internet. I found direct description of 966 deaths; the UN Office for Coordination of Humanitarian Affairs says that 1,224 people have been killed in Boko Haram-related attacks since last May.

This degree of attention to Ukraine suggests our urgency. We don’t think of Ukraine as a subject for sober observation, to be used as an object lesson before writing better domestic legislation. Our attention expresses identification and concern, and worry about how they’ll get out of this situation.

Nigeria’s pain is certainly multifaceted, combining environmental disaster, resource plundering, the nefariousness of international corporations and the problem of a legacy of executive corruption with, now, a terrifyingly capable terror organization that targets sleeping schoolchildren. However, it would seem to the casual observer that it would be a lot more applicable to think about how to deal with Boko Haram than Vladimir Putin. Russia is a familiar adversary, but one from the past – not the future. Boko Haram, meanwhile, appears to be working with other brutally effective terrorist organizations, with which it seems only to be getting better coordinated and more effective.

Beyond the logic of realpolitik and concern over tomorrow’s security threats, we need to recognize that we spread our attention across the world unequally.

Which crises urgently demand our attention? Which ones don’t?

And why is that?