Brunswick vs. Cape Elizabeth – and why campaign contribution numbers matter

Two lovely coastal towns in Maine. What could they possibly have to fight over?

I personally would not have picked them to represent poles in our current gubernatorial election campaign, but some evidence suggests otherwise.

What evidence? Evidence available in information available as of last night, when the gubernatorial candidates’ 11-day pre-election filings were made available online at the Maine Ethics Commission Public Disclosure site. (When I first started looking at them this morning, they were just in PDF form. By afternoon, they were all integrated and available as downloadable structured data – including even the new filings from today. Let’s have a round of applause for the efficient and hard-working folks at the Maine Ethics Commission!)

Last week, in an attempt to observe any signs of a 2010-style surge in Eliot Cutler’s support, I observed trends using information about the past several months of donations to the gubernatorial campaigns. The trends that I observed — that Mike Michaud had deeper reservoirs of committed Maine supporters as revealed through numbers of campaign contributions, and that they existed across a broader swath of the state — continue to be true for donations to the candidates made between September 17 and October 21. 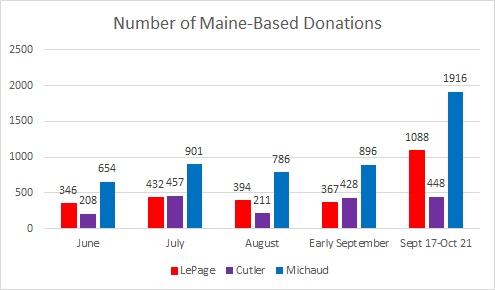 There was a massive increase in the number of donations coming in during this final major filing. Paul LePage nearly tripled his donations from Mainers, collecting 1088 individual donations. Mike Michaud more than doubled his previous monthly record of 901, collecting 1916 donations in the 9/17-10/21 period. Eliot Cutler did see a small pre-election increase in donations, but not enough to match July, the month in which he collected the largest number of Maine-based donations.

These data confirm my observations from last week. If Cutler is going to see any surge, it certainly isn’t showing itself in people trying to donate to his campaign in October. Meanwhile, Michaud and LePage are both witnessing a significant increase in the number of Mainers willing to take out out their checkbooks in order to make sure their candidate’s the one to occupy the Blaine House in 2015.

With the larger number of records, it’s also easier to observe concentrations of support for the candidates.

In my last post, I observed that Michaud was doing better along the midcoast than Cutler. The numbers that lay behind those maps that I made looked like this: zip codes, and then the quantities of individual donations from each zip code. 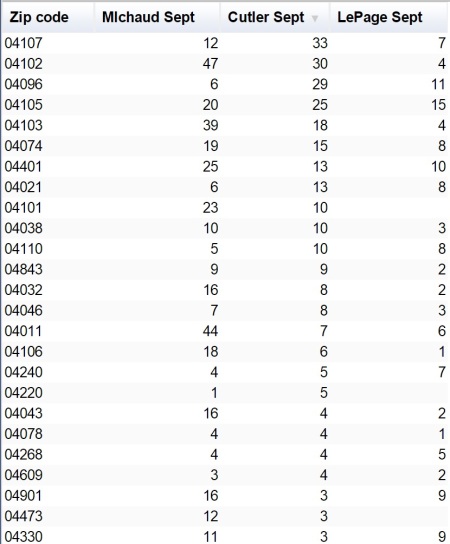 If you click on that table, it will bring you to a Google Fusion Table that lets you sort the columns by clicking on them. (Not sure why I can’t embed it in WordPress post but I can’t – if anyone wants to let me know how to fix that, I’d be grateful.)

The September numbers revealed the most general fundraising success for Michaud lying in the Portland area, but the largest number of Michaud donors from a single zip code came from Brunswick — 44 Michaud donations in September from 04011. Despite beating Mitchell by 10 points there in 2010, Cutler received just 7 donations with a Brunswick zip code. LePage received 6.

How did these dynamics change over the past month?

(Again, click on the numbers to go to a live Fusion Table where you can sort it by clicking on the column headers.)

Looking at the new month’s records, we can observe very serious competition for the affections of Cape Elizabeth. In this final large pre-election filing, LePage received the most attention from 04107 donors, with 40 donations. Michaud tripled his number of donations from 04107, receiving 38. Cutler received 34 donations from 04107, which, although it was his largest single number of donors from any one zip code, put him behind the other two candidates with regard to October’s Cape Elizabeth donations.

Also of interest: in October, many more donations came from the town of Scarborough. Although Cutler carried Scarborough handily in 2010, Michaud raised significantly more 04074 zip code October donations (52) than either LePage (27) or Cutler (12).

Now, a last question. Does any of this matter at all? The demographic profile of campaign donors, especially with an incumbent in the race, is certainly quite different from voters at large. For example, I expect LePage’s election-day support to be many, many times larger than what we’re seeing in campaign donations, though the massive jump in number of donations during this last filing helps fill in some of the places where we would expect him to do especially well. (For example, in addition to the large increase in wealthy parts of southern Maine, we see lots of donations to LePage from Skowhegan in this filing.)

I did try to think of a recent case where I would have access to both detailed campaign finance information and detailed vote information. I knew that the New York City Campaign Finance Board provides very detailed records that allow you to sort donations by date and location. New York City also had a very recent important election: their 2013 mayoral race to replace Mayor Michael Bloomberg. Since the Democrats were strongly favored to win this election, the interesting test lay not in the general election but in the city’s 2013 Democratic mayoral primary.

I looked at donations going from residents of the city’s five boroughs to the four most popular candidates running in the Democratic mayoral primary:  Christine Quinn, John Liu, Bill Thompson and Bill de Blasio.  I looked specifically at July and August, the last two months before the September primary.

Here’s what I found: 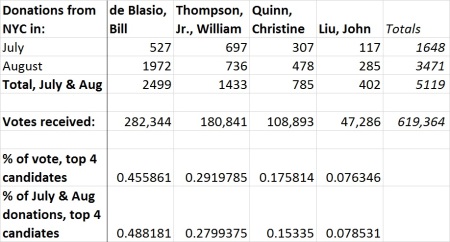 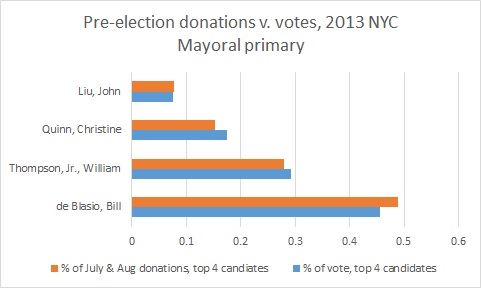 In other words, there was a great deal of correlation between New Yorkers’ donations and July and August and who they ended up voting for.

This is hardly rigorous proof of the validity of using local campaign donations to predict elections. This technique is highly speculative and still exploratory, and I think it might anyways be best suited to open races where nobody starts with the advantage of incumbency.

However, the New York correlation does show, I think, that local campaign donations in the post-Citizens United age can play a new role in understanding the flux and scope of local preference. In the Maine case, for example, I think you’d have to show that Cutler’s supporters are less likely than Michaud or LePage supporters are to donate to their candidate in order to say that there’s no predictive value here.

We’ll certainly soon have an opportunity to know much more, in very specific detail, about the relationship between local campaign donations and voting behavior in Maine.

That, of course, is not by a long shot the most important outcome of this election. However, as a present resident of the District of Columbia, it’s the only outcome that’s left for me to reap directly. I know it’s not for many of you. Nonetheless, at least by providing this information, I feel like I have done some civic due diligence and offered what insights I can.