The dust from the victory parties has settled. The governor has made some predictably gubernatorial statements. The election results have been fully experienced, if it will yet be some number of weeks before they actually show up on the Maine.gov election results site.

Luckily, we have the Bangor Daily News and Portland Press Herald unofficial election results. Putting these together with an official data record of the state’s voting, hunting, and demography, what can we learn about exactly why Tuesday’s vote turned out the way it did?

I’m interested in two outcomes: the vote for LePage which was not well predicted by polls, and Maine’s high voter turnout, relative to the rest of the country.  (Because there’s nothing like seeing a national paper validate your prejudices about exactly which state is the Best State in America, I hereby forgive Reid Wilson for not citing my earlier post.) While there are lots of potential causes for both of these outcomes, I wanted to see what the evidence for them looked like.

Let’s take the governor first. I identified three most likely causes for the substantial increase in support he enjoyed this election: anti-presidential sentiment; the impact of Cutler/anti-Democratic Party “Third Party”-type preference; and, of course, bears.  (Please indulge me in putting aside the argument from incumbency for the sake of this post – it’s obviously important, but it does not explain the details of variation in the governor’s support.)

The impact of Maine’s referendum on bear baiting was the most interesting potential reason discussed for increased support for LePage, theoretically achieved through the mechanism of increasing turnout in more Republican areas. There’s an endogeneity problem with exploring this, however, since how do we know that energized LePage voters aren’t simply more interested in supporting bear baiting?

Luckily, some of the old, wonderful Maine.gov DataShare site is still up and running.  One of the more popular datasets on the site happens to be IFW Kills, a record of all of the registered hunting successes of the 2010-2012 period. This dataset lists all of the wild animals legally killed by date and location, giving us a very good picture of the geography of Maine hunting frequencies. I looked at the number of animals killed by county, and then divided each by population to get each county’s per-capita hunting frequency.

Even though not all of the successful hunting trips up in Piscataquis, Somerset and Aroostook counties are conducted by people living there, we can anticipate that this is a pretty good representation of locations where a larger proportion of people would identify as hunters. And, in fact, counties’ per capita reported hunting kills correlate pretty well with Tuesday’s vote on Ballot Question 1. If there’s at least one registered kill for every ten people in your county, then your county soundly rejected the measure.

However, was this relationship determinative for the governor’s victory? Let’s look at where Tuesday’s new votes came from.

Gov. LePage’s vote total on Tuesday, according to the BDN’s unofficial count, was about 32,000 higher than Rep. Michaud’s. Even though the governor gained votes in all of the counties, there just aren’t enough voters in the serious hunting counties to create that difference.

Adding up new votes for LePage in 2014 from the two southern counties of Cumberland and York alone, however, nearly gets you all the way there.

Although Maine’s most visibly liberal city is in Cumberland County, there are an increasing number of people in southern Maine (and in the former Democratic stronghold of Lewiston/Auburn, and in the area around the University of Maine, Orono) voting for a Republican governor.

This brings us to our second possibility: that Maine’s “Independent” voters category has some meaningfully different preferences from those of Maine Democrats, and some of Cutler’s southern supporters ultimately preferred a Governor LePage to a Governor Michaud. Despite the strong public narrative around Eliot Cutler’s appeal to Democrats, it’s important to consider the possibility that Cutler was also appealing to people looking for a socially liberal, but economically conservative, alternative to the Democratic party.  Then, when Cutler was no longer viable, they voted for the candidate who would enact their economic preferences.

2012 county level results on both of these measures do a pretty good job predicting the county level 2014 LePage vote, but rejection of the 2012 higher ed bond is a closer match. When we look at the same-sex marriage vote against LePage vote there are outliers, like Aroostook County which strongly opposed same sex marriage but supported Michaud at 43%, or Cumberland County which had fewer than 35% opposing same sex marriage but over 40% supporting LePage. For the economic question, there are no real outliers.

Looking at the past twenty years of gubernatorial elections in Maine, it becomes pretty clear that Maine has a persistent interest in candidates who occupy the socially liberal, economically conservative space.   Totaling all third-party or Independent candidate votes together in each election, we have each of the Republican, Democratic, and 3rd Party/Independent categories averaging out to about a third of Maine’s gubernatorial electorate. 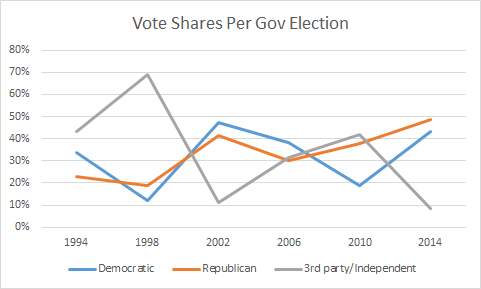 This brings me to my final theory. What was the impact of national sentiment towards the president?

(Don’t worry, there’s no chart for this one.)

Looking at county vote share for Obama in 2012, I did find a small negative relationship between county vote for Obama in 2012 and an increase in votes for LePage in 2014 – in other words, there might be some direct anti-Obama sentiment in the vote for LePage – but it seems more likely that if there was an effect it was indirect and not directly corresponding to the 2012 presidential vote.

I’ve now covered the question of the increase in votes for LePage. I’m moving to my second question. What about our levels of turnout in general? Were there specific and identifiable causes increasing county movement to the polls?

Not that I could figure out.

People, this is still a mystery to me. I looked at bears, I looked at 2012 Obama support, I looked at social and economic conservatism, I looked at demographic change in counties between 2000 and 2010. Pretty much all of the counties increased their turnout between 2010 and 2014, with the exception of Knox and Oxford which decreased very slightly. Counties in both north and south were way up in terms of turnout. Central Maine was maybe a little less excited, but still turned out far above their 2010 levels. It was a good year for voting all around Maine.

For most states this would mean that the electorate was growing along with the state’s population, but Maine’s population isn’t growing! According to the US Census, the state might even be shrinking a little.

So I leave it to you. What is it that explains Maine’s steady increase in midterm voting? And did I miss something obvious that connects it to the election results?

(Update: If you’re interested in seeing the data I used for this post, I’ve collected it in a single spreadsheet here. My sources are linked in the second tab.)

1 Response to Obama, Third Parties and Bears, Oh My!